I went to the first EAUG (Enterprise Architect User Group) on the 15th of May, where around 100 people from the EA community of users and experts gathered in London.

I summarised in this article a selection of talks I attended:

SWISSML: not the Helvetica modelling language, but SYSML + UML to provide the same level of specifications on both software and hardware blocks 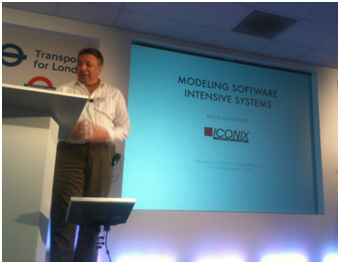 « Modeling software engineering systems » talk from de Doug Rosenberg at ICONIX deals with the critical role of specifications on embedded systems software. In a Software Engineering context, any software bug can not only lead to economic losses, but also to safety and security risks including those of life threatening nature. As regards, the realisation of the system's software blocks shouldn't be carried out separately from the specifications. However this is often the case e.g. where the software implementation is carried by a SCRUM development team.

To illustrate this, Doug used the American Airlines' reservation system, where he experienced as a passenger a bug in the issued ticket where the printed month was incorrect (e.g. March instead of Feb) despite his flight was confirmed on the right date. A simple search in Google showed that AA chose an agile development process for some its software.

Doug reminded some of the agile software development principles and methodologies:

According to him, those principles aren't compatible with a system engineering project, where detailed specifications are required, and simulating the model before its implementation is common practice, e.g. through the use of SysML (parametrics) or MatLab tools.

The choice of a separated agile process could increase the risks of critical bugs. In the given AA example, imagine the safety risks that could arise due to the passengers reservation system bugs if data from this software was fed into the aircraft luggage weight management system.

It would therefore be sensible to require the right level of specifications using UML models for the system's software, based on the system's SysML models. This leads to SwissML (UML + SysML).

Doug introduced the SysML pillars to model the system:

SwissML involves producing the same level of specifications for hardware blocks (e.g. System on Chip) and software blocks. EA can be used to add to a modelling project with existing SysML models, UML models for the software. Hence the software components can comply with the existing system's requirements, and be defined through an appropriate and detailed level of specifications.

Note: choosing an agile development process to implement software wasn't the subject of this talk, instead it was discussed that those aren't compatible in a systems engineering context. 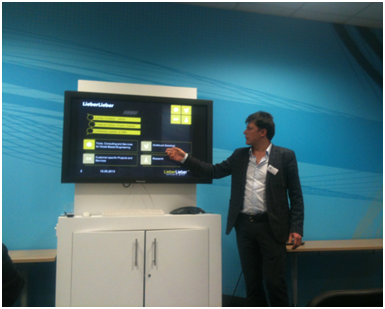 Roman Bretz from Lieber Lieber GmbH shared his experience with SysML, starting with a list of principles about modelling languages (e.g. to enable communication, requires that it is understood by all).

Based on his experience, projects where SysML and EA were used mostly include requirements and architecture models (SysML requirements, BDD, IBD diagrams), and only few included dynamic models as well (SysML activity, state machine, and use case diagrams).

Roman presented the structure of a "thermometer" EA project via the following SysML models: 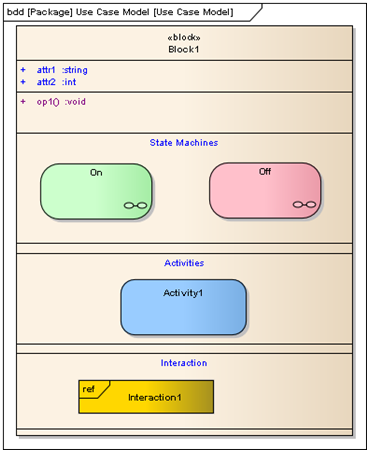 Knut Paulsen shared his experience on an advanced usage of EA at EVRY, company based in Norway.

EVRY has defined a UML profile to extend its use case models according to some principles from Alistair Cockburn book:

Knut and his team have implemented 2 add'ins using EA API:

1- An Excel import/export to produce in an Excel file a list of requirements for each stakeholder to update directly in Excel, before importing thel back into EA. EA CSV export/import features are limited, hence the need for an add'in to easily synchronise requirements between Excel and Enterprise Architect.

The advantages of complex and complete EA add'ins were illustrated throughout this talk, whilst showing a true investment of EVRY in extending EA capabilities to the methodology adopted by its teams.

These tools aren't publicly available, hence making this session very interesting to get a feel of what we can get against a given amount of efforts spent.

A single version of the truth

Ian Mitchell from AbilityEngineering shared his experience as a BA consultant on a large project at the European scale. Ian joined this project to deal with a large number of change requests and requirements.

Context: the first version of this product had been released, leading to numerous requests for the next revision. Those requests were submitted by product managers from each involved country, many of them being specific to local laws and regulations.

Ian started an Enterprise Architect project to capture the following:

EA has become an essential asset by capturing all the knowledge for "a single version of the truth", preventing having documents and information spread across wikis and file repositories. Ian provided us with an interesting advice: instead of attempting to redefine everything in EA, the Business Analyst should spend efforts in gathering and collecting existing documents, standards, or MS Visio drawings, and push them as references into EA so this project holds a relevant amount of knowledge, right from the beginning. From then, the team can for instance easily create a link in EA from a new business rule to an existing standard reference, e.g. preventing losing track afterwards of what justified this rule and its deletion for the wrong reasons.

Once the analysis was complete for the next product's version, a specifications document was generated and submitted to get the approval from each product manager. However since many items from this document were specific to a single country, many stakeholders were reluctant in giving their approval on a document which partially had no relevance from their perspective.

Ian decided to identify with each product manager what they exactly expected from the product. Traceability links were created in EA from stereotyped actors - stakeholder - and various elements within the models. This traceability made it possible to generate a specification document for each manager with a relevant set of requirements, business rules, and use cases. EA native document generator wasn't used as it was too limited, so Ian managed to achieve this using EADocX document generator.

This European EAUG has been a success; I gathered a number of very interesting and useful feedback from EA experts and consultants, and it let me discuss about various topics on EA with speakers and members of Enterprise Architect community.

More information is available from www.eausergroup.com.

Published in SparxSystems Enterprise Architect modelling tool
Tagged under
More in this category: « Context filtering : traceability feature on the current diagram Use the element Properties view to access attributes, operations, and set links via its shortcuts »
back to top